Be Restless   by Juan Mari Arzak
Next 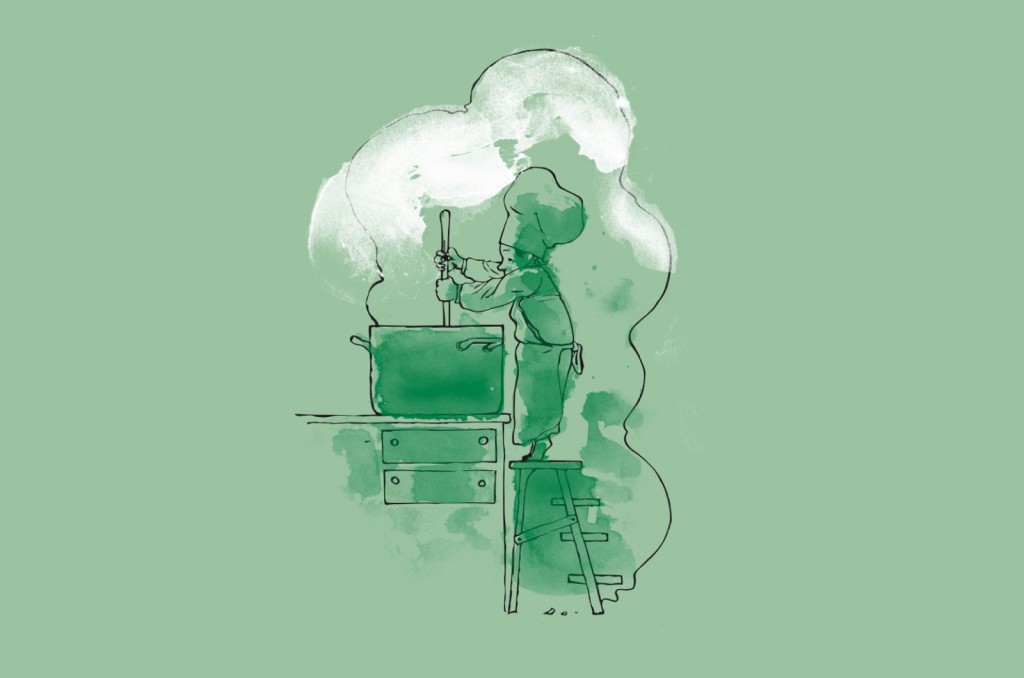 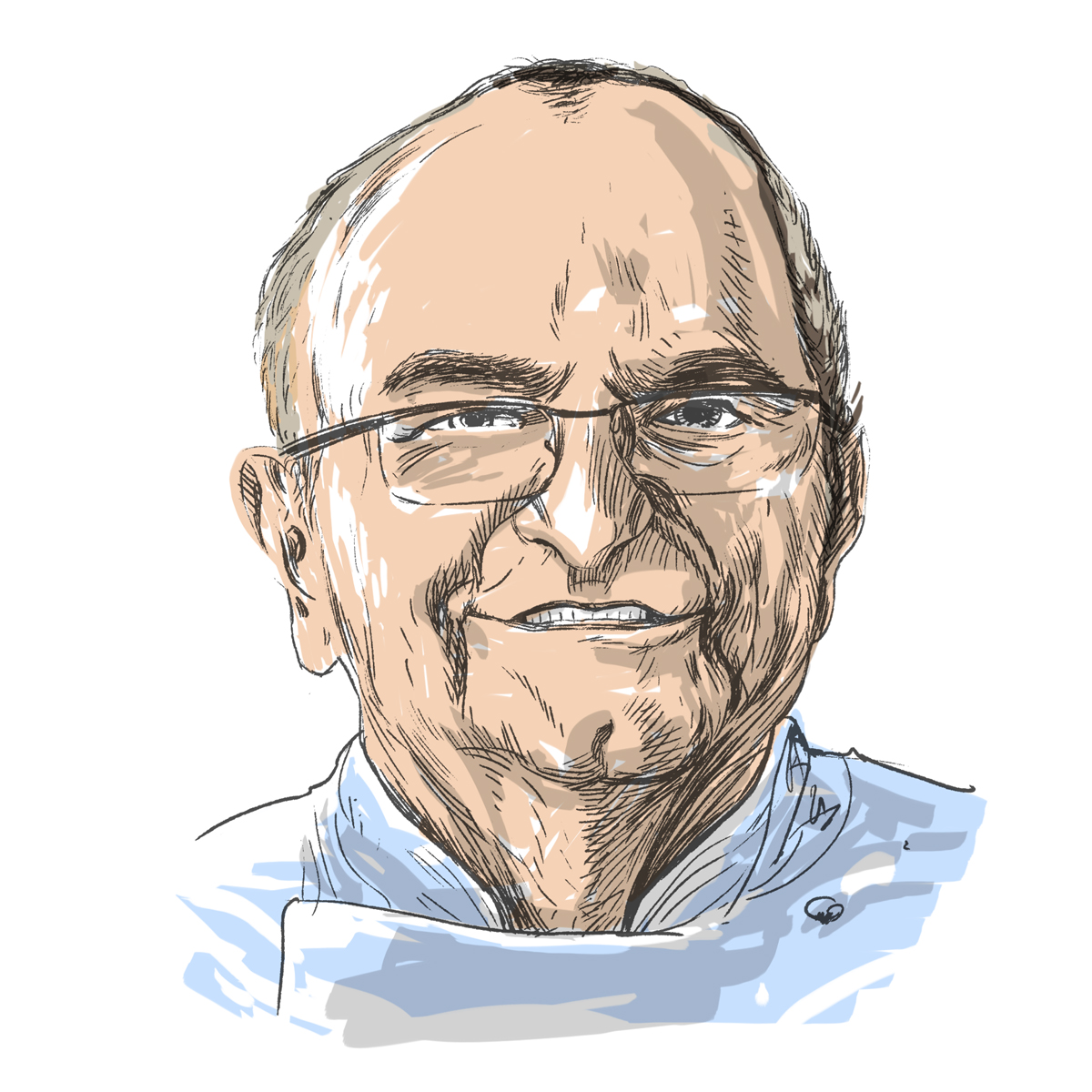 Since I’ve been around for a while, people often assume that I believe cooking has changed for the worst. They want me to talk about which things need improvement, or which ideas and traditions we ought to revive. But I can’t ever come up with answers to their questions—because the environment today is so much more promising than it used to be. Cooking today is so much better, whether we’re talking about the food of our grandmothers or of a celebrated restaurant that was in operation two decades ago. The products, the variety, the wine: there’s no doubt that all of it has improved.

The chef of today is more cultured. I genuinely feel that to be a cook today, you have to get a bachelor’s degree before you start in a kitchen. In this new landscape, you are better served if you have general knowledge and a sense of context; this helps, too, if the cooking path turns out not to be for you. Years ago, we would start working in kitchens at the age of fourteen, because we were hungry. Let’s keep reversing that tradition, as we’ve seen how things have evolved for the better.

Instead of discussing what’s [not] annoying me, I’d like to write about how I ended up where I am, and to share some advice for the cooks that are just starting out.

I am the third generation to operate Arzak. My grandparents opened the place in 1897 as a tavern and bodega. When my parents, Juan Ramon and Francisca, took it over, they began turning the place into more of a restaurant, and little by little, people in town started to hear about a kitchen outside of the city center that was making excellent stews.

My dad died in 1951, when I was nine. My mom kept on with the restaurant, and she was an extremely hard worker. She did it all by herself. She would do banquets, weddings, baptisms, and her cooking was the go-to for everyone who needed to host a special event. In 1966, after I had completed my military service, gone to cooking school, and worked in restaurants in Europe, I returned to Arzak and started cooking.

I continued to watch and learn from my mother, who was an extremely patient teacher. But I also started to introduce some of my own dishes to the menu. I did this because I was anxious and restless. I felt something within me. It was the same for my dear friend Pedro Subijana. We wanted to do things, to change things, to move forward, to create something.

So we decided to develop a New Basque Cuisine. Every month, the twelve chefs who joined us in trying to create this community would host a dinner. We told the press what we wanted to do and what we were about. We were founded upon three basic principles: the first was to recover ancestral dishes that had been forgotten; the second was to take iconic dishes and make them correctly, since we all know that those recipes can deteriorate over time; and the third was to open up innovative places that made the point that restaurants are an important part of the culture.

This took a long time. It wasn’t that it was hard to come up with new things or evolve, though this is of course a challenge. It was that very few people would eat my dishes. Basque cuisine is so delicious and popular, with its roasts and seafood, that people weren’t convinced. With time—years and years—people began to realize that what we were doing was pretty tasty, too. At first, I took six dishes of mine and offered them alongside six from my mother. Later on, I put on twelve dishes of my own. I started doing a degustation menu, and more and more people became convinced that what we were doing was worthwhile.

We were able to show people that we were doing an auteurist cuisine, highly personal yet deeply rooted in tradition. I will tell you: there are a handful of Basque dishes that deserve the Nobel Peace Prize, and you really can’t change them. Right now, for example, there’s a dish of txipirones in their own ink on the menu, and I can’t say we’ve changed much about it.

All of this is to say that if my story is any indication, the future is bright. I have no doubt that we will see many great movements in cooking. You will hear some people say that chefs are done cooking ambitious food, that it’s all casual and simple now, or that fine dining is dead. I couldn’t disagree more. A lot of people may like going to more modest places because they are excellent and cheap, and a lot of chefs might like to open them because they are easier to open.

I think that people are focusing on the wrong things when they talk about the restaurants of the future. People talk about how long the menus will be, how elegant the spaces, these sorts of material concerns. The restaurants of the future will be about three things: excellent food, smart service, and above all, lots of affection—cariño— for the guests. The latter is the key as we go forward. All of this “yes, sir” and “no, sir” business is gone. You have to respect the guests and be professional, but you can’t be servile, because the most important thing is showing them that you have heart and you want to give them everything you have.

There will always be young cooks with that restlessness and seemingly endless reserve of passion, like I had. And to those chefs, I can’t emphasize enough: if you want to make something happen and build something special, think like a kid. If you don’t want to do what everyone else is doing or has been doing, go to a playground or walk around a park and see how kids carry themselves: the way they walk, the way they interact with everyday objects, the way they ask questions about the most basic things. I have seen it work with my daughter Elena, who is the future of our restaurant.

Move forward thinking like that, and you’ll see how things will come to you.

You can purchase a copy of Dispatches via the MAD Store.

Notes from the Big Peach
by Chris Ying 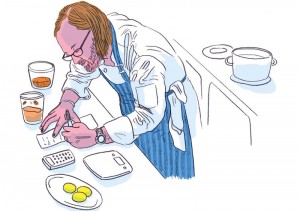 Culture of the Kitchen: Wylie Dufresne

Wylie Dufresne on why cooking is a team sport. 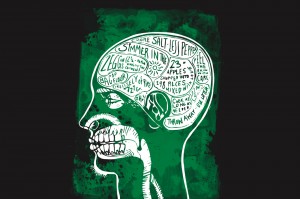 On All the Ways To Write a Recipe
by Christine Muhlke 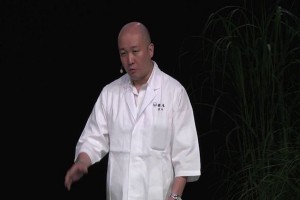 Asking the Winds of the Seasons

A kaiseki master on how to be in tune with the seasons.